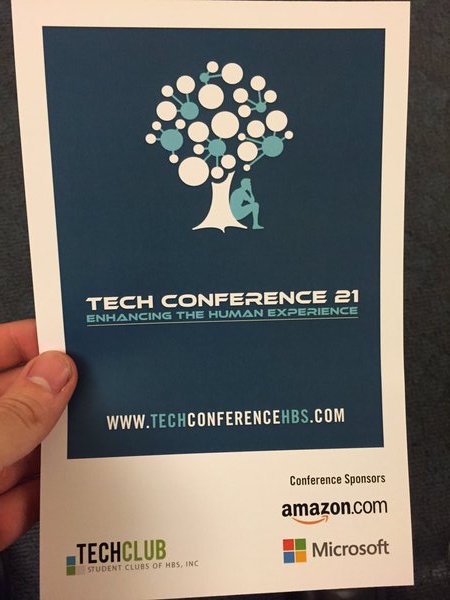 Prior to leaving for Thanksgiving break, Harvard held a fantastic event called “Tech Conference 21” – formerly the Harvard Cyberposium. In the past, this event has hosted such keynote speakers as Sam Altman and Marrisa Mayer, to name a few.

Even though they held the event last year, I chose not to go. I finally decided to attend this year, despite it being held on the final Sunday prior to break, and starting at eight in the morning! Overall, it was the right decision.

A few speakers really stood out to me and I would like to share what I learned from their talks.

To kickoff the event was Jonathan Rochelle (@jrochelle), Product Manager at Google. Jonathan primarily runs Google Education at their office in New York City. So what’s interesting about Jonathan? Well, turns out that he was the co-founder of Google Drive- an incredible tool that so many students and professionals use today. JR spent 15 years on Wall Street working for J.P. Morgan. A large majority of his job involved complex modeling using spreadsheet software that did not allow collaboration. After leaving J.P. Morgan, he founded his company 2Web Technologies which took spreadsheets and converted them to web apps. While we take real-time collaboration for granted now, in that time, it was unheard of. Long story short, they ended up being bought by Google and created into what would become Google Drive/Docs. It is truly an incredible story. No way he thought that the issue of real-time collaboration and web apps would have had such an impact as it has on the education and professional community. An idea that started from working in IB, transformed how we work on the internet today. Jonathan is a really down to Earth guy, and left us with the questions: “What do you want to achieve?” and “Why are you here?” He encouraged everyone to ponder these questions every time we assessed our life goals. Powerful stuff.

In a shorter “Tech Talk”, Bob Davis (@BobDavisHCP), Partner at Highland Capital and Founder of Lycos, gave an inspiring lecture about the characteristics of successful founders. Given his expertise in the venture capital community, Bob had some excellent advice. Two of the most important gems from his talk were the concepts of perseverance and creating magic moments. He said that starting you own business requires you to be focused 7 days a week, 24 hours a day. In his words, “If you let up, you lose”. No matter how hard things get, you have to persevere. If you really love what you do, and crave success, you cannot let up. Finally, he told a touching story of a customer service experience he had at Disney. His son, who was a child at the time, had a stuffed animal called Puffy that he was very attached to. One day when they exited the hotel, they left Puffy behind, and the cleaning crew swept it up by accident. When Davis’ family returned to the hotel, his son was very upset to find Puffy had disappeared. Disney worked tirelessly to find Puffy, who was inadvertently taken away in the bed sheets and shipped off to a far away cleaning facility. Despite this, the Disney crew retrieved Puffy and brought him back to Davis’ hotel room. This was a truly magic moment for Davis’ son – it made them lifelong customers and created an experience they will never forget. To that point, Bob Davis said, “Everyday we have an opportunity to create magic moments in what we do”. Given this opportunity, we need to work our hardest to create these lifelong magical moments that our potential customers, coworkers, friends and family will never forget. Again, another really powerful tidbit of life advice.

For the sake of longevity, I will combine Brian Halligan’s (@bhalligan) fireside chat and Bill Wagner’s (@B_Wagner) talk into one review. Brian Halligan is the CEO of Hubspot, arguably the biggest marketing firm (inbound marketing firm) in Boston. They went public nearly a year ago and are growing rapidly. They have found tremendous success, and Brian and his cofounder are a large reason for this. Brian is incredibly laidback and easy-going. His most important bits of advice were to find a cofounder and to create a unique company culture. He prides himself on creating a fantastic culture at Hubspot and attributes that largely to their success. Additionally, he told a really funny story about how he met his cofounder that I will save for another time. But in short, he stressed the concept of finding a cofounder, as founding a business cannot be done alone. I could not agree with him more. Bill Wagner, incoming CEO of LogMeIn, gave a very detailed talk on the Internet of Things. For those of you not familiar with the topic, it is a 1.3 trillion dollar industry that I highly recommend you spend time understanding. He predicts that in the future, the average household will have 400 connected objects. He thinks the world will grow from 6 billion connected devices, to 20 billion. IoT will change how we interact and how we go about our daily lives.

Overall, I really enjoyed the event. I am constantly grateful for the resources that the Boston community provides for learning and networking. There truly is no other place outside of Silicon Valley to live and breathe technology and entrepreneurship culture. Boston is the hub of so many spectacular universities and is increasingly becoming the spot for innovative companies. Opportunities like this Tech Conference are something I recommend all students take advantage of. Yes, it is a time commitment, and students do have busy schedules, but it is well worth it!