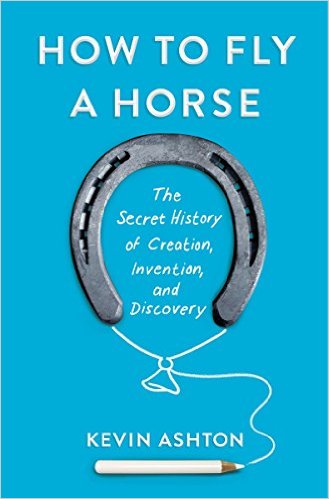 Creativity is the most sought after skill today, yet we are taught that creativity is rare and only present among a select few.

Kevin Ashton, inventor and coiner of the phrase “Internet of Things”, denounces this notion in his book, “How to Fly a Horse”. The book contains a vast amount of historical examples to support his opinions meanwhile remaining wildly engaging. I wanted to share some of his insights that captivated my attention, followed by my thoughts on how these themes applies to us today. Keep in mind, this is just a minuscule display of all the knowledge in the book, therefore I encourage everyone to read the book in its entirety.

Creativity is Not Unique

This is the main thesis of the work. The “creativity myth” as Ashton calls it, is cited to support many concepts. First, it states that creativity is limited to only geniuses. Second, it says that more often than not, these bouts of genius happen in giant leaps, or from aha! moments. Ashton claims that none of this is true. While we might equate most inventors to geniuses, studies show that intellect has no correlation to creativity. Having a high IQ does not mean you are creative.

Inventions are not developed from thin-air, but are often the result of ordinary thinking and gradual steps. While it may seem like inventions sprout from some eureka moment, this is indeed a folk tale. Great inventions were made by those who were committed to their ideas and worked countless hours to make their imaginations reality. We might not all be equally creative, but we all can create.

Rejection and Failure Are Natural, So Never Settle

New ideas will be faced with rejection. The world is not as open to new ideas as we might think. Despite this rejection, we must have a belief beyond reason to continue creating, usually known as faith. Without this, rejection from the populous will disparage our souls and force us to give up. Just like rejection, failure is also a natural result of any creation. Dyson created 5000 prototypes before his world-famous vacuum was finalized. Nothing good is created at first try. We must fail often, and fail humbly. These incremental failures culminate with the creation of something great.

Ashton invokes the story of Steve Jobs’ creation of the iPhone to further this point. Even though smartphones were already in existence, Jobs saw problems with them that others did not. He utilized this desire to make a better smartphone. Jobs forced himself to do two things: see a problem and to never be satisfied. While others were complacent with their products, he saw a slew of problems. He deeply believed in all his ideas, more than anyone else, to the point where he was never satisfied. This constant dissatisfaction led to the creation of numerous revolutionary devices.

Firms boast that they promote creativity and encourage creative endeavors from their employees. Ashton does not believe that this is true in actuality. Firms, while they do not explicitly say so, value control and compliance over creativity. Creative individuals, as studies show, are generally more unconventional and harder to control. This makes them less than ideal employees for corporations. New ideas, while encouraged, challenge management and the status quo.

An interesting study of children showed that children were the best at working in groups while business school students were the worst. They solved problems faster than adults. It turns out kids are much less likely to waste time over power struggles and planning. They focus on getting things done and creating rather than locking horns with their peers. This “capacity to cooperate” he believes is lost as we progress through higher education and individual achievement becomes more important.

He suggests an alternative to prevent these behaviors. He says that small, motivated teams are the best for creativity. He even emphasizes the value of partnerships, citing that while there typically is a clear leader, each partner helps one another create individually, leading to great work. This organizational structure must be open and receptive to new thinking. Value should be placed on proving ideas rather than criticizing and shooting them down- the “show me” method. Meetings should be as infrequent as possible. Meeting, he states, is a euphemism for talking, and talking is not creating. Meetings result in hours of planning and not getting things done. He uses the same argument to denounce brainstorming, stating that creative work is done individually, not in large groups. Large groups lend themselves to a lack of productivity that inhibits creativity.

Writer’s Block is a Myth

Woody Allen, famous filmmaker, is a harsh critic of those with writer’s block. We are bred to believe in producing the best work and maintaining peak performance. Work that is subpar is unacceptable. Even if our work is bad, Allen says that we must keep creating. The only bad work is not working at all. To counteract the second point, Allen says that you must have an intrinsic motivation- an internal passion to create. Waiting for external forces is simply procrastination – nothing is getting done. Above all, create your work uninterrupted from outside opinions, your opinions, and from societal pressures. Criticism can wait until after a draft is completed. This is the most creative and productive path.

We Suffer from Inattentional Blindness

Some solutions are right in front of us. We fail to recognize many of these solutions as we develop a mindset that sees the many aspects of the world as “obvious facts”. The falsity of concepts is ignored because we have been taught that they are inherently true. This line of thinking also evolves with expertise. As our brain processes problems more efficiently, it has “selective attention” to the solutions it perceives as right. This inattentional blindness leads to less thinking and consideration to unlikely solutions. Ashton suggests approaching the world with a “beginner’s mind”, Shoshin in the Buddhism world. This approach does away with developed assumptions about the world and helps us realize apparent solutions.

Even though we spend a lot of time contemplating “what-if” scenarios, we cannot predict the future. The outcome of our creations, whether positive or negative, is unforeseen. Nonetheless, the appropriate action is to keep creating. Continuous creation will result in a problem-solution loop that ultimately makes the world better. An important aspect of continuous creation is that creation should not be limited to a select few. All genders, races, ages must be allowed and encouraged to create.

My Thoughts on How These Insights Apply to Today’s Society

Ashton’s work is truly remarkable. While his concepts on creativity seem like common sense , I would argue many of them are not so common in the way we operate as a society today.

We teach young students to despise failure – failure is for losers, underachievers, and high school dropouts. Rejection suffers the same fate. More and more students do not understand why they are rejected from their dream schools, or why their ideas are not good enough to receive an ‘A’. Instead of dealing with rejection to further their curiosity, they resort to whining, or quitting. It has created a society of students that expect to be handed success.

Overall, society is incredibly bipartisan. People criticize each other’s ideas because they insist they are not right or because they fear they might have unforeseen consequences. Collaboration and creativity are halted for power struggles and the competition to be right. There is lots of noise and not a lot of doing.

I am not certain what the right solution is to this worldly problem. Ashton would suggest to approach this issue by asking, “Why doesn’t it work?” and, “What should I change to make it work?” This is a complex question given the scope of the issue, but I think it all starts with us as individuals. I believe our purpose in life should be to leave the world a better place than we came into it. We should create a better society for the generations to come, just as previous generations attempted to. If we demonstrate more compassion and love for each other, I think we can achieve this solution and reach the creative frontier Ashton suggests in his book. This is easier said than done, but as I have learned, the only way to find out is by doing.